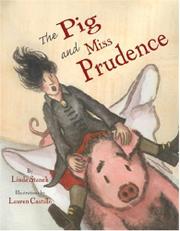 THE PIG AND MISS PRUDENCE

While it strives to fit into the cheery mode of The Old Woman and Her Pig, this doesn’t have the simplicity of the classic. Miss Prudence gazes out her window to see a pig eating her flowers and goes out to shoo him away, but instead a rearing horse frightens the pig and she “tumbled through the air and landed on the pig’s back.” As the pig and Miss Prudence race through a town that might be early New York, silk drawers, a clothing bag, a rag doll, a priest’s stole and numerous other items attach themselves to Miss Prudence who is still riding on the pig. At each encounter, Stanek repeats the refrain, “ . . . but the pig ran on,” offering the audience a chance to help tell the story. Finally, the pig races into the Mayor’s office, deposits Miss Prudence and all the accumulated stuff, “and the pig ran on.” While not necessarily a first purchase, there’s potential for a good storyteller to enliven the telling and introduce a small audience to a slice of turn-of-the-century New York. (Picture book. 6-8)