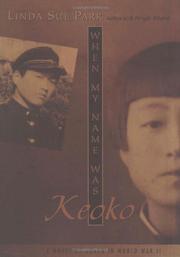 WHEN MY NAME WAS KEOKO

The author of three novels set in different periods of Korean history (A Single Shard, 2001, etc.) now turns to WWII for the story of a brother and sister and their lives with their parents and uncle. Telling their story in alternating voices, the two siblings offer complementary and sometimes different versions of events. Sun-hee, in the last year of elementary school in 1940, loves studying and is an obedient daughter while older brother Tae-yul loves speed and machines. Their uncle is a source of concern because he publishes an underground, anti-Japanese newspaper. The Japanese had conquered Korea in 1910 and as the war looms their demands on the Koreans intensify. Food grows scarcer and the Koreans, long forbidden to study their own culture and language, now must take Japanese names. Thus Sun-hee becomes Keoko. In one memorable passage, Sun-hee misunderstands an oblique warning from her Japanese friend and assumes that her uncle’s life is in danger. He flees, never to be seen again as the war and the post-war communist government in the north keep them apart. This beautifully written story captures these events through the eyes of a very likable young girl. In her voice, readers share the joys of playing cat’s cradle, eating popcorn, and tasting American chewing gum for the first time. Through Tae-yul’s they experience his gritty determination to join a kamikaze unit in order to protect his family from the suspicious Japanese. There is food for thought when Sun-hee’s father tells her that “they burn the paper—not the words” when referring to the Japanese soldiers who destroy her diary. There have been relatively few stories for young readers that are set in Asia during WWII. This powerful and riveting tale of one close-knit, proud Korean family movingly addresses life-and-death issues of courage and collaboration, injustice, and death-defying determination in the face of totalitarian oppression. (afterword, bibliography) (Fiction. 10-15)