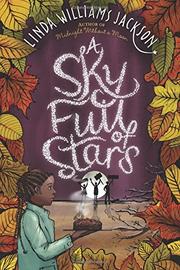 A SKY FULL OF STARS

In this sequel to Midnight Without a Moon (2017), a story that followed the horrific lynching of Emmett Till, Jackson continues the tale. It’s Stillwater, Mississippi, in November 1955. Roy Bryant and J.W. Milam have been acquitted of Till’s murder despite several witnesses to their crime. The boy’s purported crime was whistling at a white woman. His sentence was death. Rose “Rosa” Lee Carter is a 13-year-old black girl struggling to make sense of her world in the aftermath of such a blatant miscarriage of justice. The story of racial injustice in the Deep South feels all the more wicked told through the eyes of a young girl. Rosa Lee’s coming-of-age during the turbulent era shows her quest for survival—within her family, as a young black woman, as a soul burning for justice. Jackson sensitively shows how Rosa changes from a girl consumed with shame—for her dark skin, for her grandmother Ma Pearl’s cruelty, and for her mother’s abandonment—into a girl learning to take pride in herself and what she brings to the world.

Filled with teachable moments that are perfect for modern-day discussions of race and justice, this is also a story about the complexities of family and choices