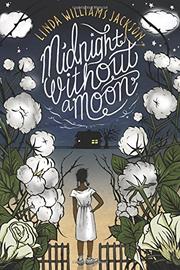 MIDNIGHT WITHOUT A MOON

The ugly brutality of the Jim Crow South is recounted in dulcet, poetic tones, creating a harsh and fascinating blend.

Fact and fiction pair in the story of Rose Lee Carter, 13, as she copes with life in a racially divided world. It splits wide open when a 14-year-old boy from Chicago named Emmett Till goes missing. Jackson superbly blends the history into her narrative. The suffocating heat, oppression, and despair African-Americans experienced in 1955 Mississippi resonate. And the author effectively creates a protagonist with plenty of suffering all her own. Practically abandoned by her mother, Rose Lee is reviled in her own home for the darkness of her brown skin. The author ably captures the fear and dread of each day and excels when she shows the peril of blacks trying to assert their right to vote in the South, likely a foreign concept to today’s kids. Where the book fails, however, is in its overuse of descriptors and dialect and the near-sociopathic zeal of Rose Lee's grandmother Ma Pearl and her lighter-skinned cousin Queen. Ma Pearl is an emotionally remote tyrant who seems to derive glee from crushing Rose Lee's spirits. And Queen is so glib and self-centered she's almost a cartoon.

The bird’s-eye view into this pivotal moment provides a powerful story, one that adults will applaud—but between the avalanche of old-South homilies and Rose Lee’s relentlessly hopeless struggle, it may be a hard sell for younger readers.