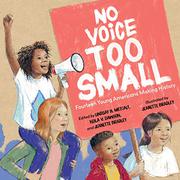 NO VOICE TOO SMALL

Tributes in prose and poetry to children and teens of today who have spoken out to support a cause or protest injustice.

Budding activists in search of child role models beyond the high-profile likes of Malala Yousafzai and Greta Thunberg may well draw inspiration from this less-intimidating—but no less brave and worthy—lineup. For each, a poem by one of 14 poets and a laudatory paragraph flank an engaging, soft-focus portrait by Bradley that digitally emulates chalk and pastels on a textured brown background. “Each activist,” write the editors, “inspired a poet who relates to an aspect of the activist’s identity.” New Yorker Charles Waters, for instance, gives a shoutout to 6-year-old Samirah “DJ Annie Red” Horton, “proudly / representing the People’s Republic of Brooklyn” with her anti-bullying rap; Zach Wahls, founder of Scouts for Equality, poses with his two moms next to a triolet from Lesléa Newman. Other contributors, including Carole Boston Weatherford, Janet Wong, and Joseph Bruchac, honor young people making good trouble in areas of contention as varied as climate change, gender identity, immigration law, safe drinking water, and gun violence. The contributors are as diverse of identity as their young subjects, and as a sidelight, the poems are cast in a variety of identified forms from free verse to reverso, cinquain, and tanka.