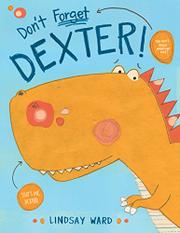 A lost toy goes through an existential crisis.

The setup is on the copyright page. Amid the markers of a universally recognizable waiting room—fish tank, chairs against the wall, receptionist’s window, kids’ coloring table—is a tiny orange T. Rex with a dialogue balloon: “Hello?” A turn of the page brings Dexter T. Rexter into close view, and he explains his dilemma directly to readers. He and his best friend came for a checkup, but Jack’s disappeared. Maybe readers can help? But when Jack is still MIA, Dexter becomes disconsolate, believing his friend might have left him behind on purpose; maybe he likes another toy better? Dexter weighs his good qualities against those he lacks, and he comes up short. But when readers protest (indicated by a change in Dexter’s tone after the turn of the page), Dexter gains the determination he needs to make a plan. Unfortunately, though hilariously, his escape plan fails. But luckily, a just-as-upset black boy comes looking for Dexter, and the two are reunited. Ward’s ink, colored-pencil, and cut-paper illustrations give readers a toy’s view of the world and allow children to stomp in Dexter’s feet for a while, his facial expressions giving them lots of clues to his feelings. Readers will be reminded of both Knuffle Bunny and Scaredy Squirrel, but Dexter is a character all his own.

Lost and found was never so riotously funny or emotionally draining.