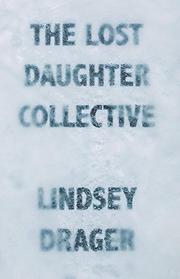 "Imagine a room full of daughters. How is it different than a room full of girls?" On the eve of her fifth birthday, the daughter of the Wrist Scholar waits for her father to make his brief middle-of-the-night visit to her bedroom to tell her stories of the Lost Daughter Collective. Lending a touch of the medieval to the ominous future Drager invokes, the girl will grow up to be known solely by her occupation, the Ice Sculptor, like her father and the men who form the Collective—The Woodsman, The Archivist, The Wainwright—whose daughters fall into one of two categories: Alices (missing) or Dorothies (dead). As the stories of the Collective members weave around those of the girl and her father, the perspective begins to shift and the timeline destabilizes, turns inside out, until it is no longer the Wrist Scholar telling stories of the Collective to his daughter but the men who will someday form the Collective telling stories of the Ice Sculptor to their not-yet-lost daughters. What was present has become past or the past and present exist simultaneously, nestle and curl into one another, until at last the daughters claim narrative dominance. Drager meditates on our means and motives for telling stories, highlighting the ways in which tenor and content shift depending on the teller. Though references to various literary figures, like Charlotte Perkins Gilman and Virginia Woolf, may be a bit on-the-nose for some readers, and occasionally a point is whacked with a heavy and earnest hammer, overall the book delivers an intelligent and densely layered story.

A fleet and eerie novel, like the last strand of dream before waking.