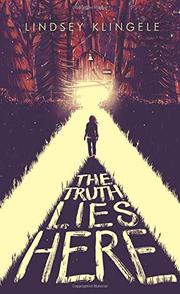 While trying to find her missing father, Penny uncovers a conspiracy in the Upper Peninsula.

Penny’s father lost her trust when she discovered that he fabricated the cryptozoology stories for his tabloid magazine column. Years later, she returns to small-town Michigan from Chicago, where she has lived with her mother since her parents’ divorce, for a summer visit with him, planning on mining the town for an article about its decline due to the recession, which shuttered the local plant that was the area’s employer. When her father doesn’t show up to meet her at the airport, she thinks he’s chasing a story—but the geeky boy next door, her one-time best friend, half-Chippewa Dex, who is now her father’s protégé, thinks it’s something sinister. After Penny’s investigations into local economic woes turn up an oddity (the word-for-word identical response that it’s “best not to think too much about it” from anyone asked about an accident at the plant), mysterious federal agent types show up around town, and bodies similar to the mysterious one that prompted Penny’s father’s latest story start to pile up. Penny becomes determined to get to the bottom of everything, and her well-plotted, conspiracy-laden journey leads her to revelations about perspective and her relationships with various loved ones. Aside from Dex and his mother, all characters are white.

A surprisingly heartfelt coming-of-age story wrapped in a zany package.