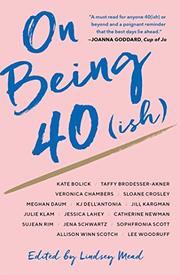 In her debut book, journalist Mead gathers essays by women in their late 30s to early 50s, reflecting on love, friendship, careers, family, dating, and self-image, among many other issues that have become important as they face a challenging new decade of their lives. Although the editor underscores the “divergent voices” in the collection, the majority of the contributors are white, middle-class, successful writers (one, Sujean Rim, is an illustrator who offers a cartoon about giving up skinny jeans). They do, however, reveal diverse experiences: Meghan Daum, memoirist columnist for the New York Times Book Review, has settled into single life and a fruitful career in Manhattan; still, she feels a “current of constant low-grade shock…about how old I’ve managed to become.” KJ Dell’Antonia, editor of the New York Times’ “Motherlode” column, apologizes for not answering an email message because of the many more important tasks (buying bread, snuggling her son) that occupy her time. Essayist Sloane Crosley assesses the changes in her middle-aged face. Two particularly moving pieces concern friendship: Catherine Newman’s chronicle of the outfits she and her best friend wore, beginning in kindergarten, in 1972, and ending in 2015, when Newman cherishes her friend’s tunics, yoga pants, and Ugg boots after she died of ovarian cancer. “I am wearing my heart on my sleeve,” she writes, “my memories like a crazy quilt of loss.” It took a shattered bone for novelist Allison Winn Scotch, who prided herself on being stubbornly independent, to see that friends and family can be extraordinarily caring, “more worthy than you realized, even when you already found them worthy enough.” The essays are interspersed with brief remarks about the biggest surprise, most important lesson, or most salient mantra gleaned from getting older and, the writers hope, wiser. “Everything looks better, feels better, and is way more manageable in the morning,” offers Lee Woodruff, whose husband’s (journalist Bob Woodruff) roadside bomb injury was the subject of one of her memoirs.

Candid, often charming revelations from a host of articulate women.