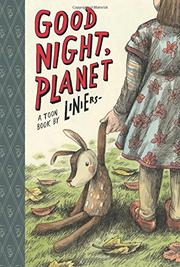 From the Toon, Level 2 series

by Liniers ; illustrated by Liniers

After a day full of play with her toy fawn, Planet, a little blonde white girl drifts off to sleep—and Planet is off to play for the night.

Once the toy is downstairs, it hears a sound it can’t identify and becomes so frightened it passes out. Coming to, it sees it’s the family dog, a spaniel named Elliot, and though the toy is relieved, the calm doesn’t last long, as Elliot chases Planet and, catching the toy, gives it a playful, vigorous shake. They decide to go to the kitchen for a snack of cookies, where they meet a friendly rat called Bradley, who takes them on a new adventure to capture the biggest cookie they’ve ever seen. After their big adventure, Planet gets a few hours of sleep before they’re up to play again. Liniers has a gift for wordless storytelling through his art-only panels, using muted tones in watercolor under skillfully drawn pen-and-ink lines that create thin outlines and heavy areas of shading. The lettering is distinct and whimsical, and the lines of dialogue are funny, conveying Planet’s personality as patient, kind, and quick-witted. The Spanish-language version, Buenas Noches, Planeta, changes only Planet’s name, and though Liniers is Argentine, the Spanish is not localized to any one dialect, making it an easy inclusion in kids’ libraries and a perfect matched pair for kids who would benefit from the same book in English and Spanish.

Liniers continues his run of clever comics for kids, with a fun adventure and panels full of easy-to-follow action. Delightful.