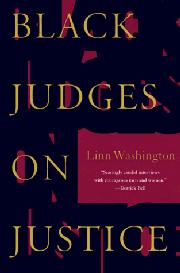 Perspectives from the Bench

Washington, executive editor of the Philadelphia Tribune, conducted these interviews of black judges with the conviction that they would have an important and unique point of view of the judicial system. ``Teach'' vies with ``justice'' for the honor of most-used word in the book. Those polled here, who include such noted judges as Leon Higgenbotham and Constance Baker Motley, express their belief that as minority judges they have an obligation to reach out to black communities, to rekindle some faith in a system that is often perceived as the enemy. Of the 30,000 federal judges in the country, only 1,000 are black. Those interviewed here call for more minority judges, who would be needed role models and whose presence might enable minorities in the system to believe that they're getting a fair shake: A black who is judged in the court of another black can perhaps feel that justice has been done, not that he has been done in by the system. In addition, most insist that fixing problems in society would do more to reduce crime than would longer and more frequent incarcerations. Many of these judges are on the forefront of a movement to find sentencing alternatives, and most dislike mandatory sentencing. (Henry Bramwell is a rare exception here, believing there is no alternative to incarceration.) What emerges from the collection as a whole is a portrait of judges (including two women, who address the complexities of being a ``double minority'') whose own experiences of bias served as a motivation to participate in and improve the system rather than avoid it like the plague. Unfortunately, the transcribed interview format used here by Washington tends to blur the distinctions of voice that might better have emerged in written submissions. This is an uneven but insightful series of observations that, though generally liberal, covers the political and geographic spectrum.