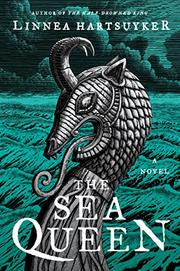 Now fighting opposite her brother, Svanhild must decide how to navigate an ever more treacherous Norway in Hartsuyker’s follow-up to The Half-Drowned King (2017).

Things aren’t going exactly as planned for Ragnvald, who has fought in King Harald’s quest to unite Norway for six bloody years. As a warrior, Ragnvald is used to raids and war, but he is often startled by Harald’s penchant for revenge. Even after all the warring is said and done, Vikings have strict codes of honor, and Harald pushes Ragnvald into ever more gruesome confrontations that trouble his conscience. In a surprising move, Ragnvald’s sister, Svanhild, has married his enemy, Solvi, a skilled sailor and warrior rousing an army to resist Harald’s conquests and burdensome taxes. This puts the two siblings at odds, even after Svanhild leaves Solvi and returns to Ragnvald’s camp a grieving mother. As the factions continue to war, Svanhild is caught in the middle. Will she stand by her brother’s side or lie to protect the man she still loves? New characters, like Ragnvald’s stepbrother, Sigurd, give us insight into the labyrinthine political machinations, back-stabbings, and betrayals at work in the Viking age, taking us straight into the camp of one of Harald’s betrayers. Like many second books in a trilogy, this one can get bogged down trying to put all of the players in the right places at the right time, and the novel relies heavily on exposition. But Hartsuyker is a skilled storyteller, and the moral battles her characters wrestle with on and off the battlefield add compelling psychological depth to an old and epic tale. She also restores women’s work and political maneuverings to Ragnvald’s story, and Svanhild emerges as a complicated, talented, and shrewd warrior in her own right. “Should I give you a ship and a crew so you can fight my sea battles for me?” King Harald asks Svanhild after she proves herself a worthier sailor than many of his men. Svanhild, of course, doesn’t miss a beat. “Yes...I think you should.” It’s a good thing Harald listens.

A seafaring epic with bloodcurdling raids and political intrigue to spare.