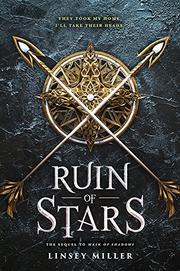 From the Mask of Shadows series, volume 2

In this conclusion to a fantasy duology, genderfluid assassin Sal hunts down the five Erlend nobles on their hit list.

Sal is out for revenge on North Star, Deadfall, Riparian, Caldera, and Winter, the code names for those responsible for the decimation of Sal’s home country, Nacea. Designated the new Honorable Opal and afforded the resources of the queen of Igna’s elite assassins, Sal hunts down the Erlend nobles who now threaten Igna with war. While uncovering the dark plot that connects flayed corpses, severed ears, and missing children, Sal copes with PTSD and deepens their relationship with Elise de Farone. The bloody action is diluted by scene after scene of lengthy dialogue and repetitious narration. Despite technical issues, readers will appreciate the novel’s timely parallels to our world; Erlend’s “us first” mentality and adherence to heteronormative gender roles are particularly familiar. Miller (Mask of Shadows, 2017) remedies the previous book’s misstep of conflating expression and identity. This time, she more accurately represents genderfluidity by asserting that presentation does not equate gender identity and by introducing more transgender and nonbinary characters. The cast is also racially diverse; Sal is brown-skinned, with other characters ranging from white to dark brown.

Though at times long-winded, this is a fitting conclusion to an inventive fantasy series.