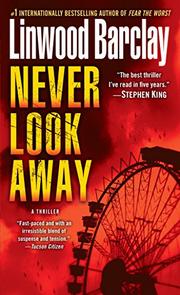 Suspicion falls roundly on a small-town reporter when his wife disappears from a family outing to an amusement park.

Jan Harwood had been acting strangely for some time before she disappeared, telling her husband David how much better off he and their son Ethan would be without her. He’d noticed bandages on her wrists, and she’d told him about an aborted suicide attempt at a nearby bridge. Although David assumed she was just going through a phase, when he received an anonymous e-mail from someone who wanted to tell him about some shady doings between a local politician and a for-profit prison operator, he figured he’d take her along when he went to the meet, even if only to keep an eye on her. The next day, after a scare at the amusement park when a bearded stranger briefly made off with Ethan, she was gone, disappearing somewhere between the main gate and the family car, to which she’d returned to fetch a forgotten backpack. Things start looking bad for David when the police notice that David’s credit card had only been charged for two amusement-park tickets—one adult and one child—and when his wife is nowhere to be seen on the park’s security cameras. When police realize that no one has seen her since the two of them drove to a service station in a wooded area to meet his source, David becomes the prime suspect in a murder investigation. David, meanwhile, does a little digging into his wife’s past, and begins to suspect he never really knew her at all. Barclay’s previous thrillers, especially Fear the Worst (2009), worked by being believable enough to force the reader to see things through the eyes of his Everyman protagonists, who suddenly find themselves thrust into a world of crime, lies and suspicion. But here, with a few exceptions, the characters are far too wooden to clinch the deal, and the writing is bland at best, occasionally dipping into the downright bad.

Lame characters and groan-worthy prose make this book a slog.