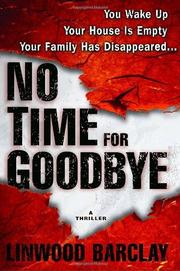 NO TIME FOR GOODBYE

What kind of family would disappear in the middle of the night, abandoning a 14-year-old girl forever?

Canadian newspaper columnist Barclay (Stone Rain, 2007, etc.) tries his hand at bourgeois terror, getting it largely right in a dark domestic thriller. Cynthia Bigge was going off the tracks a little in her 14th year. Bad mouth, hoodlum boyfriend, incomplete homework, sullen face, the usual intense adolescent mess—but nothing so bad that her mom and dad and brother, all of whom loved her despite her crummy behavior, would want to walk out on her forever. Yet that seems to have been the case for Cynthia, who woke up hungover in an empty house after having been yanked out of her date’s car by an angry dad. Two decades later, married to nice high-school English teacher Terry Archer, now the mother of bright little Grace, Cynthia has never really gotten over the disappearance. Raised by her gruff but loving aunt Tess, Cynthia can’t bear for Grace to be out of her sight. Narrator Terry tries his best to cope with Cynthia’s tensions, but the couple’s appearance on a cold-case TV show seems to push Cynthia over the edge. Instead of the expected flood of helpful clues from a fascinated nation, there are only a few fruitless leads. Worse for the family, Cynthia keeps seeing things like a mysterious recurring automobile and a stranger who looks like her brother, if he were still alive. Is she going ’round the bend? Friends and family seem to think so, but Barclay weaves in the spooky thoughts and comments of someone who clearly has it in not just for Cynthia, but for anything and anyone having to do with her. It all comes back to that disastrous night and to the odd, unclear occupation of Cynthia’s father, a job that kept him on the road far too much.

A little talky, but scary enough to keep the pages turning.