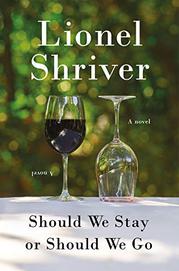 SHOULD WE STAY OR SHOULD WE GO

Is it a good idea to kill yourself before you become elderly and burdensome? Shriver considers the possibilities.

After more than a decade of often sour, scolding fiction, Shriver has written her best novel since The Post-Birthday World (2007), in no small part because it revisits that book’s alternate-timeline conceit. In 1991, Kay, an interior designer, and Cyril, a physician with Britain's National Health Service, are dispirited by the death of Kay’s father from dementia. So they agree that on Kay’s 80th birthday, in 2020, they’ll take fatal doses of Seconal. In successive chapters, Shriver imagines a dozen ways this plan plays out, or doesn’t. Kay has second thoughts and is struck dead by a delivery van anyhow; or Cyril does and meets a similarly dim fate. Elsewhere, they decide to play out their dotage in a spendy retirement home, or their children discover the plan and have the couple banished to a dismal institution. More wildly, Shriver imagines scenarios in which a drug for immortality is discovered or the couple enter a cryogenic deep-freeze and reemerge to a transformed human race or suffer in a dystopian England overrun by migrants. Shriver is still Shriver, using her characters to grumble about Brexit, Covid, monetary policy, and political correctness. (“Please tell me you’re not listening to that Shriver woman,” Kay groans to Cyril. “She’s a hysteric. And so annoyingly smug, as if she wants civilization to collapse.”) But a novel with multiple tendrils means she doesn’t get locked into one point of view, and, as in The Post-Birthday World, the multiple perspectives produce a tender and complex portrait of the central couple. Mortality, Shriver finds, needn’t be morbid; one of her imagined futures is downright pleasant and testifies to humanity’s adaptability. It reads a bit awkwardly, but that'll happen when a writer tries something new.

A return to form, merging Shriver’s better instincts as both novelist and social critic.