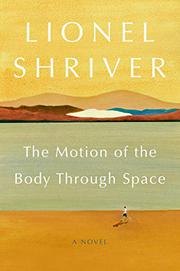 THE MOTION OF THE BODY THROUGH SPACE

A sexagenarian starts working out. Is it self-care...or something more sinister?

What on earth is happening to Lionel Shriver? In novels like The Post-Birthday World (2007), she stood out as a savvy, cleareyed observer of human foibles. Of late, though, her fiction has become increasingly hectoring, determined to call out what she sees as PC groupthink and browbeat her own characters for their gumption deficits. Here, her bugbear is people who cultishly abuse their bodies in the name of good health. The drama centers on Remington, who’s decided to run a marathon at 64 after leaving his job at New York's state transportation agency. His wife, Serenata, ought to be immediately supportive, being a fitness junkie herself. But she prides herself on being a freethinker (she invented her own workouts! She invented the hair scrunchie all by herself!) and sees marathons as a fad. Remy, she thinks, has “caught a contagion, like herpes.” To her relief, Remy barely wheezes across the marathon’s finish line, but en route finds a booster in a trainer named Bambi Buffer, who spews uplift while pressing Remy to train for a triathlon. Serenata sees cow-eyed conformists wherever she looks: in Bambi, in Remy’s fellow triathletes, in her own insufferable born-again daughter. But Shriver’s juiciest target is the woman who cost Remington his job, a simplistically rendered social justice warrior bogeyman: an unqualified 27-year-old Nigerian woman with a gender-studies degree who becomes Remington’s boss and then deliberately works to undermine him as an older white man. Alas, no triathlon can conquer the injustice of it all. There’s a note of intentional satire here: Remington’s goals and Serenata’s judgments are both inflated for effect. But in the process, Shriver has made a cartoon of her talents as a social observer.

Shriver has written some fine novels. Run away from this one.