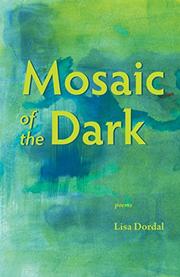 MOSAIC OF THE DARK

Many of these poems have previously appeared in literary journals or anthologies, and Dordal (English/Vanderbilt Univ.) has received a Robert Watson Literary Prize and an Academy of American Poets Prize. Her degrees in divinity and fine arts account for her graceful interweaving of Christian references. For instance, “On the Way to Emmaus,” alluding to Jesus’ post-Resurrection appearance, presents the narrator’s own dramatic metamorphosis: still closeted while teaching a New Testament course, she came out on the last day of class. Many poems dwell on this seemingly autobiographical theme of coming to terms with one’s sexuality and laying claim to a new voice and identity. The multipart “Holy Week” juxtaposes a mother’s death from heart problems with the disconcerting revelation that she may also have been lesbian—“the queerness you passed on…falling out of hiding” in the next generation. “Clues” is a prime example of religion and sexuality’s intermingling: “Her lips parting for me every time— / a deep-throated ‘hey’ or ‘hello’ / was enough, the way a weekly token / of bread or wine can be enough.” That first line—initially erotic, then an introduction to casual conversation—leads into Dordal’s reminder that sex and religion meet deep human needs as loci of connection and nourishment. Similarly playful and sensual is “Plumbing the Depths,” in which a plumber’s sticking-up zipper is “a tiny, totem dick.” Two poems in this outstanding collection reflect on encounters with prisoners at Riverbend Maximum Security Institute; the natural world provides the imagery of the title section. These pieces aren’t about showy structures or sonic techniques but about well-chosen words carefully arranged. Rhythm is key, and internal rhymes and alliteration have subtle potency. The title phrase comes from “Even Houseflies,” in which the insects’ manifold eyes are likened to those of gods hiding in corners of rooms—a down-to-earth lesson in seeing the holy everywhere. Likewise, the various approximations of prayer are helpfully loose: recognizing a prisoner’s fellow humanity, stilling one’s breathing, and communing with nature.

Humming with inspired metaphors and everyday relevance, these poems are gems.