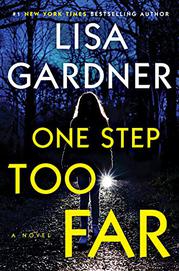 ONE STEP TOO FAR

Frankie Elkin, a miraculous finder of missing persons, seeks a man who wandered into the wilderness and was never seen again.

Last seen rescuing a missing teenager from the gritty streets of Boston, Frankie embarks from a bus in Ramsey, Wyoming, drawn in by the story of hiker Timothy O’Day, who's been missing for five years, and the last-gasp efforts of his father, Martin, to search for his remains. Frankie has some regrets about leaving Boston, but she's called to find those others have given up on. She manages to finagle her way on to the search party, which in addition to Martin includes a local guide; a search-and-rescue dog and her handler; a Bigfoot expert; and Tim’s friends, who were in the woods with him when he went missing. In the years since, they’ve moved on with their lives, but they are carrying guilt and secrets about the night Tim disappeared. As they all head into the unforgiving wilderness, it quickly becomes apparent that someone is deeply threatened by this effort to find Tim’s body. As she endeavors to draw the truth from each member of the search party, Frankie can tell that she's in over her head, and not only because she’s an inexperienced outdoorswoman. Could Tim still be alive and looking for revenge, or is there a more dangerous secret that someone would kill to protect? Gardner is incredibly skilled at developing tension and suspense; she’s equally skilled at slowly revealing complex characters and their secrets. Both gifts reinforce each other in this novel. If Frankie is out of her element, so are we: It’s not often that a thriller so deeply casts us into the darkness of both nature and the human heart.

Terrifying, primal, and very, very tense. Read it with your heart in your throat—but read it.