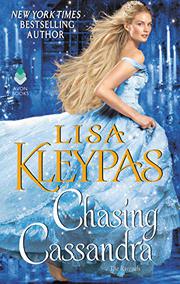 From the Ravenels series, volume 6

Can instant attraction become something more for a ruthless railway magnate with a frozen heart?

Tom Severin has fought tooth and nail to raise himself up from the slums of London. His razor-sharp intellect, cunning, and photographic memory have helped him win great political and financial power, even over the noblemen who would sooner spit on him than do business with him. Having proved himself, he feels an inchoate longing for something new, something more. When he overhears a distraught Lady Cassandra Ravenel mourn her failure on the marriage mart, Tom volunteers himself. He’s never been so instantly attracted to anyone in his life and wonders if possessing this beautiful woman might be his ticket out of boredom. Cassandra knows that Tom, a family friend who has appeared in earlier installments of the series, is notoriously devoid of normal human emotion. Unlike the other professionally ambitious heroines in the series, sweet Cassandra wants a conventionally happy domestic life, and she doubts Tom is capable of true love even if she does relish stolen moments with him that set her blood on fire. When his usual tactics fail to win Cassandra, Tom tries to forget her, but “memories of her kept catching at the edge of his consciousness, sparkling like a tenacious strand of Christmas tinsel stuck in the carpet.” A sexual assault late in the novel threatens to destroy Cassandra’s life and reputation, bringing them back together. Despite Kleypas’ (Devil’s Daughter, 2019, etc.) trademark witty banter, fun cameos from previous couples in the series, and two likable protagonists, pacing is an issue. The romance stops and starts, the middle sags, and Tom and Cassandra do not spend enough time together for their love to be entirely convincing.

Will delight Kleypas fans even if it leaves them wanting more.