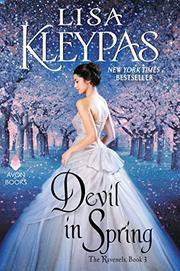 From the Ravenels series, volume 3

When two strangers are found alone in a summerhouse during a ball in Victorian London, they’re forced into an engagement neither of them wants—at first.

Lady Pandora Ravenel is a social disaster. She can’t dance, she despises small talk, and she has no interest in finding a husband. She’s also very clumsy. So no one is surprised when she ventures out to a summerhouse during a ball to look for a friend’s lost earring and gets stuck while reaching under a piece of furniture. Gabriel Challon, Lord St. Vincent, happens along to rescue her. They’re discovered by the host of the ball, and Gabriel is forced to propose. Pandora is horrified. She’s a budding businesswoman and has no intention of ceding control of her life and all her future earnings to a husband. Slowly, Gabriel’s horror over being leg-shackled to this unconventional girl turns into physical temptation and then a burning desire to make her his wife. Pandora keeps her head and demands alterations in the wedding ceremony and various legal protections before she agrees. Pandora’s oddities are a bit overwritten, and in many scenes she appears naïve to the point of being unbelievable. Gabriel is a more successful character, possessing enough intelligence and self-control that it’s satisfying to watch him lose his mind slightly over his inability to control his bride. Aside from the slightly disappointing heroine, though, Kleypas (Marrying Winterbourne, 2016, etc.) is in good form in the third novel of her series about the Ravenels. Her signature formula, the suave and sexy hero falling for a frumpy wallflower, still produces a captivating read. Fans will appreciate cameos by some of the author’s most beloved characters, and the world of Victorian England is drawn with Kleypas’ usual sharp wit and well-researched political nuances.

A funny and charming story that will delight readers from the first page to the last.