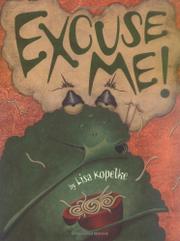 The plot of this literally explosive debut may be perfunctory, but the premise will set off fits of giggles. A mighty belcher from tadpole days, “Enthusiastic burping not only feels good, but also makes room for dessert!,” Frog is finally expelled by his disgusted neighbors, then gains a new attitude after falling in with a gang of unrestrained, enthusiastic, unabashed burpers. Wearing a disguise, he arrives back in his hometown just in time to join a gassy symphony set off by an excess of Three-Beetle Chili—and as he now follows his elephantine eructation with a polite “Excuse me,” he is welcomed back. In postmodern, Lane Smith–like illustrations, newcomer Kopelke depicts burps as cannon-like blasts emanating from the mouths of creatures that look less like frogs than knobbly, misshapen toads. Still, properly “loaded” young readers will be unable—or at least unwilling—to resist joining in the repeated indelicate choruses (especially just after lunch of centipede soufflés and mosquito pies, perhaps), and, of course, a lesson in proper manners is never amiss. (Picture book. 5-7)