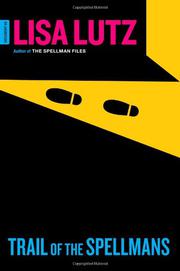 America’s most dysfunctional family of detectives (The Spellmans Strike Again, 2010, etc.) are up to their deerstalkers in another gaggle of featherweight cases.

Even though the Spellmans have assigned themselves animal nicknames to make coded communications among themselves easier, they still can’t conduct coherent conversations. Adam Cooper wants Isabel, the Gopher, to follow his sister Meg. Margaret Slayter wants Izzy’s father Albert, the Tortoise, to follow her husband Edward. Harvey Blake wants Izzy’s kid sister Rae, the Weasel, to follow his daughter Vivien. Walter Perkins, convinced that something will go wrong in his house every time he leaves, wants Izzy to keep checking on it. Izzy’s mother Olivia, the Eagle, can’t follow anyone because she’s immersed herself in so many crazy hobbies (pottery, yoga, crocheting, Russian). Sydney, the 18-month-old niece of Izzy’s brother David, is too young to follow anyone, but not too young to call everything she sees or wants “banana.” Just in case this sitcom zaniness seems incomplete, there’ll be unexpected roles for Gertrude Stone, mother of San Francisco police inspector Henry Stone, whom Izzy presciently refers to as “Ex-boyfriend #13” even as she’s sleeping with him, and for Al’s mother Ruth, the inimitable Grammy Spellman, along dozens of Izzy’s winking footnotes, which are likely to leave readers first amused, then bemused, then sleepy.

Through it all, the clients and their trifling mysteries are hard-pressed to compete for attention with the regulars, who spend far more time battling each other than battling evildoers. Lutz’s title couldn’t be more apt.