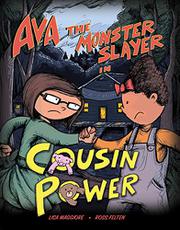 Ava, “the FAMOUS Monster Slayer,” uses all her resources to rescue her stuffed toy from the dark woods at camp.

This is not Ava’s first heroic adventure. In her eponymous 2015 debut, she was called upon to rescue Piggy from the basement. Now, Ava and her cousin Sophia are at overnight camp for the first time. Ava is “a little scared.” Sophia is “really scared.” The first night, they all go for an evening hike and eat dinner watching the sunset. But when they return to their cabin, Piggy and Sophia’s beloved Teddy are “GONE!” The counselors say it is bedtime. The boys are no help either. So Ava the FAMOUS Monster Slayer convinces Sophia to sneak out and save their friends. They make weapons out of common objects and prepare themselves for battle. They conquer a serpent, a flying creature, and the terrifying creature (which looks suspiciously like a tree) that has their friends in its clutches. Finally, thanks to “cousin power,” their mission is complete. The comic-book–style layout features the humorous first-person narration of a child who takes her tasks seriously. The crosshatched drawings let personalities shine but call a bit too much attention to the line marks, resulting in a slightly unpolished look. The combination of tenderness for stuffed companions and the fierce bravery required to rescue them is fun and refreshing. Both girls have light skin; Ava has straight, dark hair and glasses while Sophia wears her dark, puffy hair with a bow.