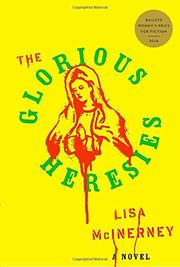 Drink, drugs, and religion are the familiar demons hounding young and old in Cork City, Ireland, where an accidental murder darkens several lives in this vibrant debut.

When Maureen kills an intruder in her home, her gangster son, Jimmy, hires an old buddy named Tony to help dispose of the corpse. The victim, a drug addict named Robbie, had been living with a prostitute named Georgie, who worked in the building where Maureen lives when it was a brothel and who makes a drug buy through local madam Tara. That’s how Georgie comes to know the young dealer Ryan, Tony’s son, who one day succumbs to Tara’s charms, as she lives next door and he is seeking respite from his father’s violence. As the narrative meanders across some five years in a depressed economy that forces many to choose “between the airport and the dole queue,” fate treats few of these players kindly. Ryan does jail time, Tony and Georgie try rehab, and two unplanned pregnancies emerge. Jimmy’s concern that his mother’s homicide will be revealed by Tony, Tara, or Georgie produces a rising tension that leads to more than one ending and two awkward flashbacks. Amid an exceptional cast, Ryan has too many facets and doesn’t quite gel, as victim or rising hood. The three main women are all well-drawn figures, with Maureen a real standout amid so much dependency, a refreshing maverick full of scathing comments on religion and hypocrisy. There’s other challenging language here, be warned, both obscenity and slang, which might be harsh or unwelcome to some ears but also, like the Irish English McInerney composes, possesses its own enticing music.

This is a colorful, ambitious first outing that recalls Dylan Thomas’ comment on Flann O’Brien’s At Swim-Two-Birds: “Just the book to give your sister, if she is a dirty, boozey girl.”