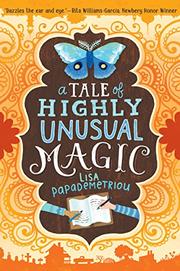 A TALE OF HIGHLY UNUSUAL MAGIC

Two contemporary girls become linked by a bizarre story from the past, magically emerging from an old book.

Twelve-year-old Kai’s visiting her great-aunt in Falls River, Texas, while Leila’s visiting her uncle’s family in Lahore, Pakistan. A solitary only child, Kai recently stopped playing her violin after deciding she would never be the best, while Leila longs for an international adventure to compete with her academically gifted younger sister. When Kai discovers a book entitled The Exquisite Corpse, inviting her to “embark on a journey of magic beyond your powers of discernment, imagination, and belief,” she sets a story in motion by writing on the blank page. Likewise, Leila finds and writes in a copy of The Exquisite Corpse. Each girl is stunned when her writing automatically appears in the emerging love story of Ralph Flabbergast and Edwina Pickle, turn-of-the-last-century residents of Falls River. As Ralph and Edwina’s intriguing story unfolds in The Exquisite Corpse, bewildered Kai and Leila (and readers) wonder what’s happening, but the omniscient, unidentified intrusive narrator eventually pulls most disparate elements together, connecting past to present and Lahore to Falls River. Papademetriou writes with assurance, spinning a beguiling tale of seemingly unrelated characters and events and tying it all together with a touch of magical realism.

Readers will respond to this tale of enduring love and nascent self-discovery.