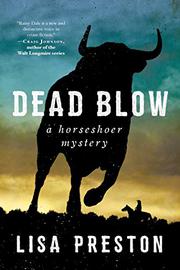 A tough yet vulnerable farrier tracks a killer, makes new friends, and commits to marriage.

Rainy Dale has settled into Cowdry, the small Oregon town she calls home. She’s living with her boyfriend, Guy, a chef whose interest in food is as intense as her own interest in horses. Rainy’s newest customer, Donna Chevigny, a widow whose husband, Cameron, died under suspicious circumstances, wants Rainy to shoe some horses she plans to sell. The area where the horses are kept, which is especially difficult to reach because Donna’s neighbor refuses to let her cross his property, is the site of Cameron’s death in a tractor rollover and home of a dangerous killer rodeo bull Cameron and a friend had hoped to use to start a stock business. Rainy offers to use her dog, Charley, to help bring in some cattle from the same area and remove the tractor’s flat tire for repair. At the corral and shed where they work, Rainy finds a discarded horseshoe which her practiced eye tells her is not from a ranch horse, and Donna’s dog makes an even more disturbing discovery: a glove containing a human hand. At length the hand is identified as belonging to Arielle Blake, the former girlfriend of Donna’s neighbor, whose remains are soon located in a shallow grave. Arielle’s affair with Cameron, one of several he was carrying on, makes Donna a likely suspect in both deaths. Overcoming her initial suspicions, Rainy comes to admire Donna. As she goes about her business, she ponders the mystery and picks up clues. All the while, Melinda Kellan, an ambitious police clerk with whom Rainy’s developed a love/hate relationship (The Clincher, 2018), hopes to use Rainy’s knowledge to help solve the murders and fulfill her dream of becoming a police officer.

A gritty tale with a complex mystery and an unusual heroine.