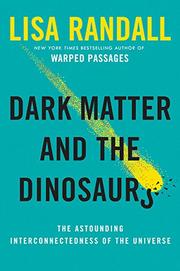 DARK MATTER AND THE DINOSAURS

The Astounding Interconnectedness of the Universe

Randall (Theoretical Particle Physics and Cosmology/Harvard Univ.; Knocking on Heaven's Door: How Physics and Scientific Thinking Illuminate the Universe and the Modern World, 2011, etc.) explores the causes of the fifth major extinction event, which occurred 66 million years ago and wiped out terrestrial dinosaurs and three-quarters of all other species living on Earth.

Dinosaurs dominated life on Earth for 135 million years. Geologists and paleontologists now agree that their relatively sudden extinction is attributable to the impact of a comet or asteroid hitting the Earth and precipitating major climate change. The author seeks to test her hypothesis that "a disk of dark matter in the plane of the Milky Way was responsible for triggering the meteoroid's fatal trajectory." For Randall, the role of dark matter in the evolution of the universe is the next scientific frontier. Dark matter constitutes 85 percent of the matter in the universe. It is not composed of atoms or electrons (the stuff of ordinary matter), and it does not interact with light or other radiation. We only know of its existence because of its measurable gravitational effects. Randall believes that it may have played a significant role in the existence of life on Earth not only by triggering a major climate-changing meteoroid collision, but by precipitating smaller impacts that deposited the heavy elements necessary for life (e.g., carbon) and possibly even amino acids. Now that the existence of the Higgs boson has been confirmed, the author is setting her sights on this exciting scientific area, which is built on the advances in scientific understanding of cosmic events over the past 50 years. Specifically, this involves establishing the possibility that there was a periodicity in the five extinction events reflective of still-unknown cosmic events possibly involving dark matter. Writing in a deceptively chatty narrative style, Randall provides a fascinating window into the excitement of discovery and the rigor required to test and elaborate new hypotheses.

A top-notch science book from a leading researcher.