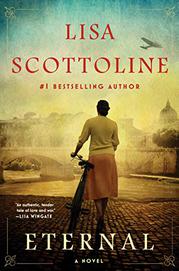 Quite a change from Scottoline’s bestselling contemporary thrillers: an ambitious, deeply researched historical account of three Roman families caught in the meltdown of Fascist Italy.

May 1937 finds Alessandro Simone and Marco Terrizzi competing for the favors of Elisabetta D’Orfeo, an aspiring journalist and cat lover who waits tables at Casa Servano, the well-regarded Trastevere restaurant owned by Giuseppina Servano, widely known as Nonna. Since Sandro’s father, Massimo Simone, is a Jewish tax lawyer who strongly supports Mussolini and Marco’s father, Giuseppe Terrizzi, is a former cyclist who proudly styles himself a Fascist of the First Hour, there’s plenty of potential for ethnic, religious, and political conflicts both between and within the leading characters, and despite the widespread conviction that Mussolini’s pre-Hitler brand of fascism will never turn against the Jews, the coming of the war flushes all these conflicts out. After Marco’s brother Aldo is killed when he joins a group of anti-fascist saboteurs, Marco, groomed by Commendatore Romano Buonacorso for a rapid rise to power, begins to have second thoughts. Sandro, his dreams of academic stardom trashed by his religion, is more open in his opposition to Il Duce. The real calamities, however, follow the German invasion of Italy, which kicks off several painful rounds of increasingly severe anti-Jewish legislation, expropriation, extortion, and finally rastrellamento, the wholesale roundup of Italian Jews to be shipped off to destinations readers will know all too well. Through it all, Scottoline struggles mightily to bring her sorely tried characters alive through their love for each other, but they mostly remain pawns of history who believe till the end that “the Vatican will intervene, of course.”

A heartfelt but schematic wartime tear-jerker.