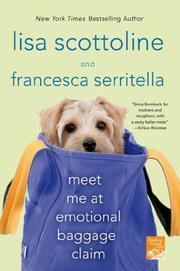 MEET ME AT EMOTIONAL BAGGAGE CLAIM

A warm, lively collection of narrative vignettes chronicling the day-to-day relationship of two women who also happen to be part of a successful mother-daughter writing team.

In this sequel to Best Friends, Occasional Enemies (2011), best-selling mystery writer Scottoline and her 20-something daughter Serritella offer insight, peppered with plenty of dish about men, their pets and each other's quirks, into the powerful bond they share. Love and worry, like "two strands in the double helix of some very twisty DNA," are at the heart of what keeps them together. And when Scottoline isn't worrying about her daughter or being worried over by her mother, then the three of them are driving each other crazy with contrarian behaviors. In describing a crosstown move she helped Francesca make, Scottoline writes, "it takes me five seconds to pack a box"; but for her daughter, packing—and especially dish-packing—involves wrapping everything several times over in white paper and then "stuffing the sides of the box with even more white paper.” Fights are also par for the course for Scottoline, her mother and her daughter. In fact, it's the thing she claims they love best because all fights eventually devolve into risible caricatures of themselves. Then there's the guilt that inevitably goes along with the love. If it isn't Francesca feeling like "a jerk" for wanting her mother to stop trying to dress her, it's Scottoline feeling the need to buy her mother an expensive gift at Christmas that the latter claims she doesn't want. Despite all the "emotional baggage" they carry (and fearlessly claim), however, their faith in and commitment to each other remains unshaken because, writes Scottoline, "that's love."

Erma Bombeck for mothers and daughters, with a zesty Italian twist.