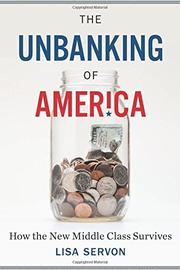 How the New Middle Class Survives

Banks seldom have much green money these days—and not many customers, either.

As Servon (City and Regional Planning/Univ. of Pennsylvania; Bridging the Digital Divide: Technology, Community, and Public Policy, 2002, etc.) writes, banks have changed since their heyday half a century ago; in becoming too big to fail, they devote almost no attention to small-scale customers, who used to comprise the bulk of their constituency. Now, banks cater to corporate customers, and where they deal with private clients at all, it is often to soak them for overdraft charges while steadily lowering lines of credit. “People who were approved for credit cards in 2011 were offered only half the amount offered to those approved in 2005,” writes the author. In one case that Servon offers almost offhandedly, a young single mother who had steadily worked her way out of a credit trough overdrew a checking account by $10 and was hit by $300 in various penalties and fees. It’s no way to run an equitable railroad, but the banks are in the business of cash equity only. Enter informal and alternative systems of banking such as check-cashing services, some more or less ethical, some nakedly predatory, and private associations such as the Latino tanda, whose members pool funds. All “substitute for or complement relationships with formal institutions.” Servon provides firsthand knowledge of how they work, having taken time out from academia to work as a teller and loan collector. Her conclusions reinforce the developing thesis that people move into banking and informal systems situationally, “depending on what they needed and the resources available to them.” This is not earthshaking news, but the author delivers valuable evidence on the fragility of the personal economies of most Americans these days, with fully half living paycheck to paycheck.

Servon’s approachable if somewhat academic study is an indictment of a financial structure bent on large returns at the expense of all else, but it also offers hope for ways around that ravenous system.