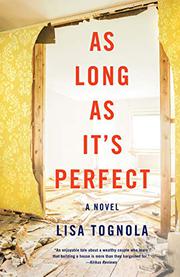 AS LONG AS IT'S PERFECT

A construction project divides a family on the eve of the 2008 recession.

In this debut novel, humor columnist Tognola uses her own experience building a house as inspiration for the story of Janie and Wim Margolis, residents of Westchester County. Their plan to move from one side of town to the other turns into a demolition and construction project that takes over their lives, threatens their relationship, and damages their finances as the housing market falls apart. Janie, a stay-at-home mom, oversees the building of the family’s dream house. She and Wim drift apart as the designs become bigger, fancier, and more expensive, and as Janie develops a crush on the architect. When Wim loses his job as an investment banker, Janie has to confront the financial realities she has been steadfastly avoiding. She and Wim will now have to work out their relationship issues along with their real estate challenges. Interspersed among the chapters narrating the construction of the house are flashbacks to Janie’s past, from her childhood separation anxiety to her romance with Wim as a Europe-backpacking college student and their early married life with her family in California. Tognola is a good writer with a strong sense of both pacing and prose (“Hunched over the plans like a rabbi among the Dead Sea scrolls”). This results in an engaging tale despite a protagonist who will grate on readers as much as she aggravates her husband. Janie’s excuse-making (“I was too lost in the joy and delusion of buying a glittering crystal chandelier to care”) and deliberate obtuseness (“I was essentially like a child. I didn’t pay bills, I didn’t know how much things amounted to, and I blithely assumed everything would be okay”) make it tempting to dismiss her struggles as First World problems. But both Janie and Wim are ultimately fully realized characters (although their children are largely in the background), and the book is an entertaining read, a relatively lighthearted portrayal of a difficult piece of recent history.

An enjoyable tale about a wealthy couple who learn that building a house is more than they bargained for.