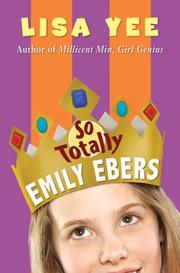 It’s déjà vu all over again for Yee in her new companion to Millicent Min, Girl Genius (2003) and Stanford Wong Flunks Big-Time (2005). This time she tells the story of the fateful summer Millicent tutors Stanford, and they both lie about it from the point of view of the third member of the triumvirate, Emily Ebers, in a series of letters she’s writing (but not sending) to her newly divorced father. The letters become increasingly heartbreaking as the reader comes to understand that Emily’s dad, a second-rate rock star trying to recapture his past glory, is not the loving and concerned father she wants him to be. The tutoring plot follows the track of its companions, but because Emily is the person being duped rather than the one doing the deceiving, she’s the least active of the protagonists. Although there is new information about Emily and the story is both touching and amusing, the reader feels its essential sameness and hopes that Yee, a prodigious talent, will move on. (Fiction. 8-12)