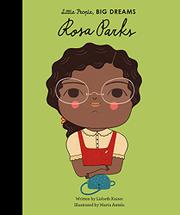 A first introduction to the iconic civil rights activist.

“She was very little and very brave, and she always tried to do what was right.” Without many names or any dates, Kaiser traces Parks’ life and career from childhood to later fights for “fair schools, jobs, and houses for black people” as well as “voting rights, women’s rights and the rights of people in prison.” Though her refusal to change seats and the ensuing bus boycott are misleadingly presented as spontaneous acts of protest, young readers will come away with a clear picture of her worth as a role model. Though recognizable thanks to the large wire-rimmed glasses Parks sports from the outset as she marches confidently through Antelo’s stylized illustrations, she looks childlike throughout (as characteristic of this series), and her skin is unrealistically darkened to match the most common shade visible on other African-American figures. In her co-published Emmeline Pankhurst (illustrated by Ana Sanfelippo), Kaiser likewise simplistically implies that Great Britain led the way in granting universal women’s suffrage but highlights her subject’s courageous quest for justice, and Isabel Sánchez Vegara caps her profile of Audrey Hepburn (illustrated by Amaia Arrazola) with the moot but laudable claim that “helping people across the globe” (all of whom in the pictures are dark-skinned children) made Hepburn “happier than acting or dancing ever had.” All three titles end with photographs and timelines over more-detailed recaps plus at least one lead to further information.

It’s a bit sketchy of historical detail, but it’s coherent, inspirational, and engaging without indulging in rapturous flights of hyperbole.