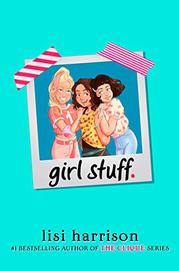 Friendship is tested when three girls start middle school and are together at the same school for the first time.

Fonda, Drew, and Ruthie have been neighbors and best friends since they were little. Fonda, excited to be attending school without being overshadowed by an older sister, can’t wait to have a group she can depend on in the face of an intimidating popular girl clique. Drew, who was at a private school, is looking forward to not having to wear a uniform and to going to the same school as Will, a cute boy she met over the summer. Ruthie, who is coming from an alternative school with a long list of rules, has high expectations for public school. However, Fonda’s plans are immediately disrupted when Ruthie is put in the tiny gifted and talented program, whose students are kept separate from everyone else. The writing is funny and will land well with a tween audience, as will the theme of shifting friendship. Fonda is forced to confront her controlling and manipulative ways as she tries to make her friends conform to her plan for popularity. Her behavior feeds into girl-drama clichés, but the portrayal of the other girls, who face the repercussions of succumbing to peer pressure and sacrificing what they truly want, is more well rounded. All main characters are cued as White.

Despite playing into some stereotypes, this will hit a sweet spot for tweens.