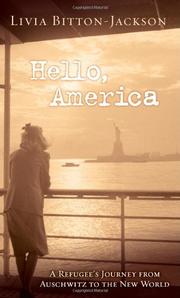 In the third chapter of her memoir, the author and her mother arrive in the US in 1951, after rescue from the concentration camps and several years of living an uncertain life in Europe. Elli is a linguist and has learned some English. This helps smooth her path as she learns about American customs, finds work, and begins a social life. Customs in this new world are often uncomfortable, especially those with young men. Indeed, much of this is involved with the people she dated and her unhappy surprise at some men’s expectations of young women. Within almost no time, she moves from work in a box factory to a position as a primary school teacher in a Jewish day school in Queens. And then, she passes her examination for the High School Equivalency Diploma and can begin college. Her accomplishments are remarkable, and Bitton-Jackson is the first one to tell us that, but her prose is often overwritten and self-conscious. It’s full of trite adjectives, clichés, exclamation points, and odd use of English. Despite some factual errors, readers might learn about the times, but the present volume is less interesting than the previous two, and those who may wish to follow her rise from her terrible life during WWII, may be disappointed. (Memoir. 8-10)