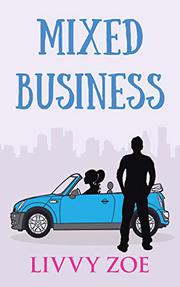 A black woman falls for her white boss—and then finds her life in danger—in Zoe’s debut romantic thriller, set in the 1990s.

Nora Richards has worked her way up to her current position at Tillman and Associates, a marketing and public relations firm in an unnamed but apparently American city. The 27-year-old is the “relations coordinator,” a job that mostly consists of billing and collections. But Nora’s biggest obstacle is organizing old, handwritten paper files. She reports to Cheryl, supervisor of customer accounts, but is awaiting a new boss. After meeting and spending a flirtatious evening with Mr. Douglas, a handsome stranger, Nora learns that he is her new boss, Sherman. This is the first time that Nora, who is black, has been attracted to a white man like Sherman. Meanwhile, Nora gets a threatening phone call; a female voice demands she give up “that Johnson file.” She has no idea what that file is, though Cheryl, who suddenly and mysteriously took a job in Italy, had earlier requested it. The telephonic threat quickly escalates into a physical assault against Nora. While she’s subsequently determined to find that file, Nora resists her attraction to Sherman even if the feelings are unquestionably mutual. This novel is more romance than thriller, and the author devotes ample time to character development. Nora is a tenacious protagonist, diving into a heavy workload with gusto and few complaints. Her romance with Sherman is equally appealing and faces believable challenges, including people who object to the relationship or imply that Nora trades sex for better job prospects. Impressively, Zoe gives potency to a steamy scene and occasional violence in simple prose, sans coarse or explicit language. The story is nevertheless predictable on the thriller front, from where the Johnson file is to the identity of at least one person menacing Nora.

An interracial attraction complicates an alluring romance in a book with a likable, grounded heroine.