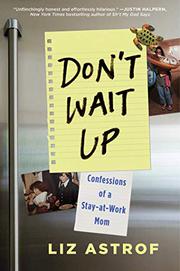 Confessions of a Stay-at-Work Mom

A producer and comedy writer for 2 Broke Girls and The King of Queens, among other programs, brings her humor to the homefront with these essays about her childhood and raising her own children.

Given Astrof’s extensive background in comedy, readers will expect humor throughout, and the author delivers with one punchline after another. The author clearly loves her children, but she prefers to leave the details of raising them to her husband. She shares a wide, wacky variety of stories: how she avoids returning home until she knows her kids are safely tucked in bed, how she handled a weekend at Great Wolf Lodge, an indoor water park where signs warned swimmers not to enter the pool with “active” diarrhea (“I could only speculate as to what ‘active’ meant to the legal team…but mostly, I was grateful that I wouldn’t have to so much as dip a toe in that shit river”), how she reacted when her stash of candy dissolved while on vacation in Mexico; why she is convinced she’ll be murdered while on a work-related weekend with fellow writers; why a “fun” trip to the mall with her kids is anything but; and how an idyllic vacation in Hawaii turned into a fiasco thanks to one errant text message. Underneath the comedy, however, are details about the author’s difficult childhood living with verbally abusive parents who fought over her custody. She also grew up with weight and self-esteem issues and still has trouble with both concerns as an adult. The juxtaposition between the absurdity and the reality of Astrof’s life creates a mostly effective balance, which pushes this book beyond the slapstick visible at the surface and into a more reflective realm.

Droll wit and profundity swirl together in a revealing memoir from a successful comedy writer.