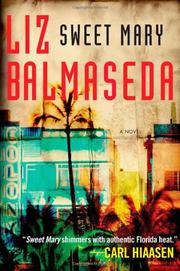 The quick-thinking, ambitious daughter of Cuban immigrants, Dulce Maria Guevara isn’t above climbing a stripper pole to make the sale on a million-dollar pleasure pad, a gambit that gets her the coveted top-seller pin in her real-estate group. This tough-minded divorcée is a totally together player on the Miami real-estate scene, supporting her son Max as well as (at the behest of her guilt-wielding mother) her deadbeat rapper brother. Life is good until DEA agents kick in her front door and drag her off as alleged cocaine queen Maria Guevara Portilla, aka “La Reina.” Our Maria is acquitted, but not before her slimeball ex-husband uses her misfortune to gain temporary custody of their son. The taint of accusation puts her real-estate career on hold, leaving her no choice but to take the law, which is riddled with nincompoops, into her own hands. She sets out to track down her doppelgänger and bring her to justice. Spelunking in Miami’s seamy narcotics and racketeering underworld requires help from her old sweetheart Joe Pratts, against whose seductive pull Guevara is less than immune. She learns as much about herself as she does about her target as she follows leads and matches wits with darkly comical characters tied to the cartel of which La Reina is believed to be the head. She’s helped by Pratt’s underworld connections (the ones that made her quit him in the first place) as well as shooting lessons from her gun-toting best friend, but ultimately it’s Sweet Mary versus the cocaine queen, who has hidden herself away behind the sleepy veneer of suburban Florida. Guevara is a classic noir figure with tons of heart; her first-person narrative chronicles Sweet Mary’s exploits with plenty of local color and lively background characters.

Slick, efficient and spare, this story smokes like a well-rolled cigar.