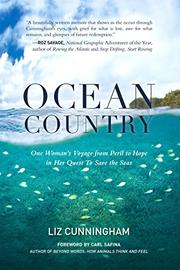 A complex narrative of how journalist Cunningham (Talking Politics: Choosing the President in the Television Age, 1995) overcame despair through her conservation efforts.

In the mid-1990s, the author was recovering from a near-death experience after her whitewater kayak had been overturned by a rogue wave, rendering her temporarily unconscious. In the aftermath, she suffered problems with numbness in her body, debilitating pain, and the onset of an autoimmune disorder. For her, surfing in ocean water had been “her happy holiday,” a place where she experienced a profound connection to nature. After her accident, it was also the scene of her brush with death. To overcome her fear, she began training as a divemaster, but her health continued to deteriorate. In an effort to recuperate, she booked a diving trip to a group of islands off the coast of Haiti and the Dominican Republic. The trip was glorious, but she became aware that this paradise was being threatened by pollution, that the seemingly invulnerable ocean was “much more vulnerable than it appeared.” Taking stock of the many ways in which humans were damaging the oceans—climate change, pollution, toxic chemicals, overfishing, oil spills, and others—Cunningham began to travel to oceans in other parts of the world, where she witnessed the destruction of coral reefs and vegetation that provide protection for shelter fish and other ocean dwellers. At first, the author was in despair. For her, the ocean had been a refuge and playground. Now her eyes were opened to the enormity of the threat. “I’d known about all of this for years,” she writes, “but it had been 'information.’ Now it was visceral, witnessed: I was horrified.” Cunningham regained her strength by joining the growing community of caring people around the world who are fighting to preserve our oceanic heritage, and she ably conveys her enthusiasm to readers.

A moving testament to the human spirit.