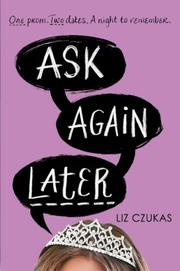 Seventeen-year-old Heart LaCoeur (who’s already planning to change her “porn star” name upon turning 18) has plans to attend the dance with friends as part of “the No Drama Prom-a Crew.” Unfortunately, fate (in which she does not believe) inserts itself in the form of two last-minute dates: her French-class conversation partner, Ryan, and her brother’s football teammate, Troy, recently dumped by his girlfriend. With the flip of a Chuck E. Cheese token, the first-person narrative splits in two. In the “Heads” version of reality, she is Troy’s date and the odd girl out among the jocks and cheerleaders. In the “Tails” version, her date is gay Ryan, who has come out only to her. The night plays out in various hijinks before the split narratives collide in a somewhat predictable, but still satisfying, romantic conclusion. In her debut, Czukas gives readers a glimpse of a genuine comedic voice and surprisingly well-developed characters, but much of the book’s promise is lost, victim of its own contrivance, in a choose-your-own-prom adventure without actual choices. Some genuinely laugh-out-loud moments are scattered throughout the unevenly paced narrative. This may work for readers seeking a cute and frothy prom-night romp, but anyone looking for something more substantial will be disappointed.

Great characters in search of a less gimmicky narrative.