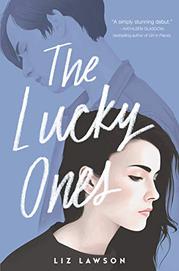 Two teens find each other (and themselves) with a little help from their friends in this story of survival, perseverance, and hope.

In alternating first-person narration, two familiar character types—loose-cannon May McGintee and awkward try-hard Zach Teller—are quickly defamiliarized. May is the sole survivor of a massacre that robbed her twin brother, favorite teacher, and five peers of their lives. She’s struggled with survivor’s guilt and PTSD ever since, and her best friend, Lucy, is the only person who keeps her going. Zach has been taking care of his family, especially younger sister Gwen, since his father fell into a deep depression five years ago. When his attorney mother defends the shooter, almost everybody he knows—except his best friend, Conor—abandons him. When Lucy auditions for Conor’s band, May and Zach meet cute. As May begins putting herself back together, Zach learns what being there truly entails. Lawson’s extraordinary knack for navigating typical teenage-rule predicaments—parent problems, friend frustration, budding desire—and the most searing circumstances—loss, terror, rage, fault—keeps the plot at a boil. Though shaped like a romance, Lawson’s remarkable debut celebrates love’s many forms, from friends who refuse to be pushed away to families slowly closing years of distance. Lucy is Haitian; Conor, Zach, and May are white.