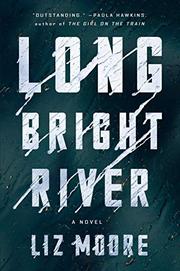 A young Philadelphia policewoman searches for her addicted sister on the streets.

The title of Moore’s (The Unseen World, 2016, etc.) fourth novel refers to “a long bright river of departed souls,” the souls of people dead from opioid overdoses in the Philadelphia neighborhood of Kensington. The book opens with a long paragraph that's just a list of names, most of whom don’t have a role in the plot, but the last two entries are key: “Our mother. Our father.” As the novel opens, narrator Mickey Fitzpatrick—a bright but emotionally damaged single mom—is responding with her partner to a call. A dead girl has turned up in an abandoned train yard frequented by junkies. Mickey is terrified that it will be her estranged sister, Kacey, whom she hasn’t seen in a while. The two were raised by their grandmother, a cold, bitter woman who never recovered from the overdose death of the girls' mother. Mickey herself is awkward and tense in all social situations; when she talks about her childhood she mentions watching the other kids from the window, trying to memorize their mannerisms so she could “steal them and use them [her]self.” She is close with no one except her 4-year-old son, Thomas, whom she barely sees because she works so much, leaving him with an unenthusiastic babysitter. Opioid abuse per se is not the focus of the action—the book centers on the search for Kacey. Obsessed with the possibility that her sister will end up dead before she can find her, Mickey breaches protocol and makes a series of impulsive decisions that get her in trouble. The pace is frustratingly slow for most of the book, then picks up with a flurry of revelations and developments toward the end, bringing characters onstage we don’t have enough time to get to know. The narrator of this atmospheric crime novel has every reason to be difficult and guarded, but the reader may find her no easier to bond with than the other characters do.

With its flat, staccato tone and mournful mood, it’s almost as if the book itself were suffering from depression.