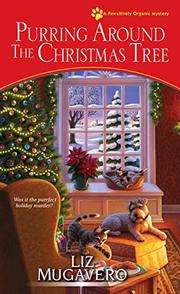 PURRING AROUND THE CHRISTMAS TREE

When Santa is suddenly struck down, residents of a small town try to figure out who among them has been bad or good.

Back from a rare foray from her little community, Kristan “Stan” Connor is ready to indulge in the spirit of the season with the other residents of Frog Ledge. At the annual Christmas parade, Stan’s mood changes from excitement to terror when she learns that the parade has been cut short after Santa died en route. Fellow celebrant Miss Viv is frantic to figure out what happened given that the role of Santa was scheduled to have been played by Seamus McGee, her sometime boyfriend. Though Seamus, the mischievous but lovable uncle to Stan’s own boyfriend, Jake, isn’t an official resident, Stan feels like he’s practically family. Doubling the family ties, Jake’s sister, state trooper Jessie Pasquale, leads the investigation into the death. She begins by identifying the deceased Santa not as Seamus but as little-known resident Harold Dewey. Stan’s pet food business, Pawsitively Organic, is so successful that she has extra time to do a little investigating of her own, and she develops strong hunches that Harold was mistaken for Seamus and that his death is connected to a copy of the Book of Kells that’s recently gone missing. Could Seamus have been enough of a risk-taker to get himself involved with the ultimate heist? Stan’s insistence translates into meddling, and she quickly gets on Jessie’s bad side, which gets her on Jake’s bad side, which gets her wondering whether she’ll solve the murder but still end up alone.

Series fans will appreciate the neighborhood feel in this return to Frog Ledge (Custom Baked Murder, 2016, etc.). Newly arrived readers may struggle to summon the concentration required by the enormous cast of characters Mugavero cycles through.