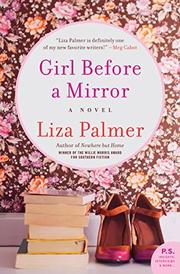 GIRL BEFORE A MIRROR

A Washington, D.C., ad executive tackles what appears to be the 21st-century woman’s greatest challenge: learning to be happy with herself.

Anna Wyatt just turned 40 and has a plan for her professional future—pitch an ad for Lumineux shower gel and hopefully the whole parent company, Quincy Pharmaceuticals, will come her way. This would get Anna out of Holloway/Greene’s pink ghetto of lady products to play with the big boys. She’s assigned illustrator Sasha Merchant—so stunning she’s confused for a model—and the two become fast friends. Sasha is obsessed with Be the Heroine, Find Your Hero, a self-help guide for women based on the plots of romance novels. They use the book as inspiration for their campaign, win over the Lumineux team and soon find themselves in Phoenix at RomanceCon, a romance-novel convention, where they will find the face of Lumineux from the male cover models in the annual pageant. There is much bicep ogling. Meanwhile, at the Phoenix Biltmore, Anna meets Lincoln Mallory: British, witty and finely attired. After a steamy elevator ride, the two begin a lusty affair touched with sadness; they keep telling each other they're too emotionally damaged to have a real relationship. Anna felt unloved by her parents, and Lincoln feels guilty over his Iraq experience. None of this is very convincing, and too often the novel reads like a self-help book itself, lacking the kind of subtlety needed for complex characterizations. When Anna and Lincoln leave Phoenix to go back to their real lives, Anna asks him to meet her in a year. Will they wait for each other? Will Anna break the glass ceiling? Palmer offers a bumpy ride to a satisfying end.

Palmer’s fine wit is certainly on display, but all the straight talk about female empowerment and self-analysis feels heavy-handed and clichéd.