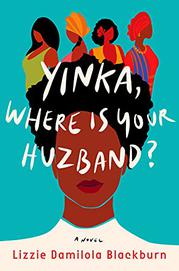 YINKA, WHERE IS YOUR HUZBAND?

A 31-year-old British Nigerian Oxford graduate is driven bonkers by the quest to find a man and a job on a very tight schedule.

Her younger sister is already married and pregnant, her best friend is engaged, her other best friend is becoming more of a frenemy, and her mother and aunties are "praying over her love life as if [she's] terminally ill." Poor Yinka is losing it. Instead of the promotion she expected at work, she's made redundant but has bragged so much about the move up that she's too embarrassed to tell anyone the truth. When pressured by her posse to set a "bridesmaid goal," she vows to get a date for the wedding (and, secretly, to get a job, before people find out the truth). Debut novelist Blackburn enlivens her account of Yinka's frantic quest by interspersing Google search histories, text conversations, and a series of flip charts with neon Post-it messages and KPIs (Key Performance Indicators) plotting out OPERATION WEDDING DATE: MY PLAN TO WIN ALEX AND HAVE A DATE FOR RACHEL’S WEDDING IN JULY!!! "Be more in touch with Nigerian culture"; "Learn a few Yoruba words"; "Increase my bum size by eating more pounded yam and doing 50 squats daily" are among the tasks she sets for herself—but since she knows this whole thing makes her look crazy, she keeps her "operation" a secret, too. Meanwhile, disappointments keep piling up as well as anxieties due to colorism, texturism, and Yinka's commitment to remain a virgin until her wedding day. After the Alex plan crashes and burns and she blows off the nerdy guy at church who clearly cares for her, only to see him pair up with a young hottie, things go seriously south in the mental health department. A liberal salting of patois—"Duh yuh waah your ier dun?" "Abeg. Give her a discount, ehn?"—and the deployment of comic Nigerian types (her mother, the aunties, the other members of her church) firmly root this novel in a community depicted with warmth and humor.