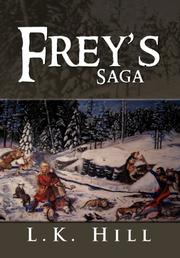 A monk in training finds a new life and the possibility of love after being dragooned by Vikings in this historical novel.

Hill’s narrative opens with a nightmare scenario: During a raid by Vikings, a monk named Brother Tibbs is murdered, which causes the eponymous Frey to wake up screaming in a cold sweat. Unfortunately, Frey’s dream turns out to be prophetic and, in the aftermath, he is taken in the raid to serve as a thrall to the group’s leader, Trygve. But luck hasn’t totally abandoned Frey, as Trygve—a generally decent man—turns him over to Auger for training. One of Trygve’s men, Auger is a former thrall himself and a genuinely good soul. He shows Frey how to be part of Viking society and discovers that the newcomer has much to teach others. Now Frey has the chance to fully contribute to the village and deal with his burgeoning attraction to Trygve’s daughter—if he can overcome the machinations of some of the village residents. As the author points out in the preface, Vikings were more than just marauders, and the narrative skillfully builds the world of ninth-century Norse folk into a believable setting. Warriors are well represented, but so are merchants, farmers, craftsmen, and criminals. And while the dialogue sounds suspiciously modern at times—the use of such phrases as “off his rocker” are particularly anachronistic—the character voices are clear, and Hill gives them depth and vibrancy beyond the usual stereotypical portrayal. As a protagonist, Frey may conform to the Mary Sue trope of character fiction—seemingly good at everything, and possessing a phenomenal number of physical and intellectual gifts—but he’s also humble and grateful, which helps to ground the hero significantly. The plotting is not always up to the level of the cast; the pacing is choppy and, rather than building to a climax, the story simply stops. But given the richness of the backdrop and the players, readers will find these flaws easily forgivable.

Despite inconsistent pacing, the strong characters and realistic setting make this tale an enjoyable read.