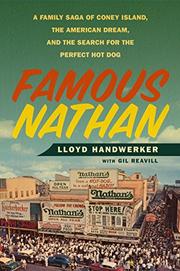 A Family Saga of Coney Island, the American Dream, and the Search for the Perfect Hot Dog

by Lloyd Handwerker with Gil Reavill

Everyone’s a wiener in this frank account by a scion of hot dog nobility.

There was no such thing as “fast food,” documentarian Handwerker asserts, before his grandfather Nathan came on the scene, having emigrated from Galicia and made his way somehow to Coney Island. There, in 1916, after proving himself a hard worker and excellent businessman in the service of other immigrants, he founded a fast-food restaurant that would specialize in hot dogs—more specifically, Nathan’s Famous dogs, the namesake of his eatery. In time, writes the author, Nathan’s Famous would be the province of stars like Jacqueline Kennedy and Frank Sinatra, hailed by proto-foodies and the hipster crowd of the day. However, he insists, “the place was never about celebrities. It was democratic through and through.” Nathan paid well, gave generous bonuses, and otherwise took care of his workers, and employees rewarded him with loyal, decadeslong service. That was all very old-fashioned, of course, and things began to turn south when the old ways began to be replaced with the recommendations of advisers, consultants, and bankers. The beginning of the end comes toward the end of Handwerker’s lively book, when Nathan organizes a stock sale that makes the family millions but introduces jealousies, conspiracies, and other headaches. The end of the end—and the lamented end of the Nathan’s Famous dog as the world once knew it—came with the corporatization of the humble wiener, bringing even more money into play but taking most of the simple pleasure out of a visit to the beach. “The Nathan’s Famous is nowadays more of a licensing business,” writes Handwerker, bringing the snack to grocery stores far and wide, if without any of Nathan Handwerker’s dogged attention to every detail.

A well-made, evenhanded, sometimes cautionary story of business, told with the affection and exasperation of an insider.