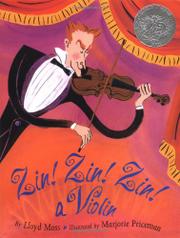 A trombone pulls a long note, to which is added the bite of a trumpet, then the downdraft of a French horn—a solo becomes a duo becomes a trio—and so on until a complete chamber group of ten (one more than a nonet) is assembled. This introduction to the members of the orchestra doubles as a counting book and triples as a cultivated piece of good fun. In his first book, Moss brings a love to classical music that spills from each page: readers' feet will tap to the beat of his verse, and they will hear the throb of horns. And though touched everywhere by whimsy, the book conveys the sense of magic that surrounds an orchestral performance. Priceman's bright gouache concoctions suggest Toulouse-Lautrec in cartoon mode. With nimble wit, she humanizes the musicians, taking away the distance that formal attire, serious purpose, and intense concentration can create. Her characters crackle across the spreads; flamboyant, quick renderings make the instruments come alive, fitting hand in glove with the zippy verse. Put this spirited production in front of readers before their next young people's concert, and show them just what happens after The Philharmonic Gets Dressed (Harper & Row, 1982). (Picture book. 4-10)