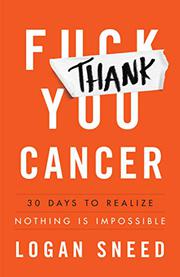 An unconventional motivational memoir about defying cancer and seizing life.

In this nonfiction debut, personal trainer and motivational speaker Sneed relates that when he was 19, in 2016, he was diagnosed with an egg-sized tumor in his brain. He underwent an eight-hour surgery, during which he was awakened at one point, so that his surgeons could make sure that his speech was unaffected. He then underwent intensive chemotherapy, and was told that his cancer would certainly return and shorten his life. Understandably, Sneed experienced the depths of despair: “I would sit alone in the corner of my room in the middle of the night,” he writes, “bawling my eyes out, alone in the dark.” But with the encouragement of his family and girlfriend, he rallied. While making remarkable gains during chemotherapy, he learned about the ketogenic diet (“high fat, medium protein, low carb intake”), which he started to follow; he says that this regimen, and his recovery progress, bolstered his optimism in the face of various setbacks. “It’s human nature to want to wallow in sadness,” he says, but he came to realize that “the only way someone else can influence you that much is if you let them”; his own doubts, he realized, were as dangerous for his mindset as the tumor was for his brain. This upbeat tone runs throughout the book, as Sneed consistently draws clear lessons from his long ordeal and applies them to his life in general: “Every minute of every day can get you closer to or further away from your goals,” he writes. “The way you spend that moment, from your mindset to your actions, is what makes the difference.” Readers of self-help literature will be familiar with such sentiments, which are relatively common in the genre. However, over the course of this book, Sneed’s stark account of his life experience gives his insights a cumulative power, and readers are sure to find them thought-provoking.

An intriguing look into an inspiringly positive mindset.